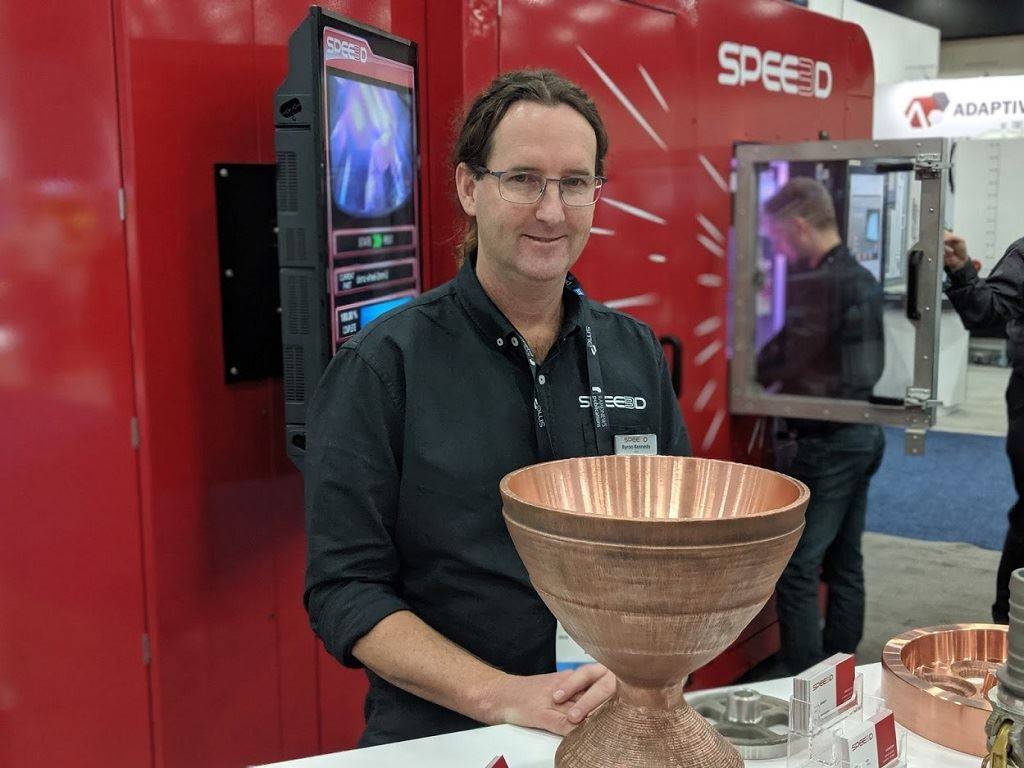 The Australian company has long caught our interest, and it was a pleasure to catch up with CEO Byron Kennedy for a chat about what we can expect soon. Mostly, it’s big news — in the form of a bigger robot and bigger parts.

Following the introduction of their LightSPEE3D system, SPEE3D announced the larger WarpSPEE3D offering, ready to take their interesting metal technology up a notch.

As Kennedy and I chatted, we looked at parts like a copper rocket nozzle. While copper remains a tricky material when it comes to additive manufacturing, it’s often in demand for traditional manufacturing. The SPEE3D process is one of few current ways to reliably print the relatively low-cost metal, and this particular rocket nozzle is eye-catching for its specs: weighing in at a whopping 20kg (about 44lbs), the part took just seven and a half hours to print. On a well-known metal 3D printer on the market, the same print would take 28 days.

“Printing fast is still key for us,” Kennedy said.

The massive WarpSPEE3D did not make the trek out to Detroit for last week’s RAPID + TCT event, but the LightSPEE3D still attracted plenty of attention. It will also not be losing its place in the SPEE3D portfolio to its big brother.

“This is the baby machine we bring to shows,” Kennedy said of the let’s-face-it-still-quite-large system. “It’s also very useful for development, for materials testing, for more customers with material needs.”

The first large WarpSPEE3D system has been installed, and is now housed at FIT in Germany. More installations are not going to be far off. The “baby” printer we stood next to was itself on its way to the University of Delaware.

“This is an exciting time for us; we have more orders than capacity, which is nice,” Kennedy continued.

The Australian company with a German installation continues to look globally for its future. Kennedy pointed out Bruce Colter in the booth, who has been brought on as the VP of US Operations, tasked with setting up and expanding the local US presence. The SPEE3D team is growing both in the US and in Australia as interest continues to build.

Applications in defense and aerospace will be key for SPEE3D’s technology. Projects with the US Department of Defense, for example, see metal 3D printing continue to make headway directly into the government sector. Parts like the rocket nozzle are also evidence of high interest from the space sector. When I asked about some of the defense uses, Kennedy said simply, “They don’t tell us what all they do.”

SPEE3D is also looking into maritime applications, as the company will soon be introducing capabilities with bronze. Parts have already been successfully made, and full data sheets will be available in the next couple of months. The corrosion-resistant material is especially appealing in maritime usage, and will surely see great interest. The maritime sector will also benefit from capabilities with aluminum 6061.

Stainless steel will also follow, with timing there closer to the end of this year.

“The focus is really on getting more into the US market, and seeing where applications are. There’s interest in defense, in electrical. Copper is interesting; there are lots of unknowns, and lots of people who make tools out of copper. Copper is very easy for us to do, and still hard for others. Key for us is just that: here’s what we do well, here’s our market. There’s a lot of focus in replacing cast aluminum, and copper casting, where it makes sense,” Kennedy said.

As we’ve noted before, the advantages from SPEE3D lie in speed (fittingly), not so much resolution. For a finely detailed print, another metal 3D printing technology will serve much better. But resolution isn’t always the full story, as a small hand tool proved.

A worker realized he needed a small wrench and created it in 15 minutes. The design took about 5 minutes, while the print took 10; he had the small copper spanner in hand 15 minutes after realizing he needed it. It wasn’t perfect, but a quick sanding brought it in spec as the 10mm tool he needed.

Eager to discover more use cases, SPEE3D also launched a design competition. Running through the end of June, the competition is open to industry and research.

“It’s about coming up with the best part,” Kennedy said. “There are some good prizes, and we’re encouraging as many people to enter as possible. We’re encouraging use of the full volume. We want to see the interest in large-volume copper and aluminum prints.”

Any cookies that may not be particularly necessary for the website to function and is used specifically to collect user personal data via analytics, ads, other embedded contents are termed as non-necessary cookies. It is mandatory to procure user consent prior to running these cookies on your website.